Historians believe that the Cheshire meres were created as a result of subsidence thousands of years ago. The mere at Pickmere was apparently formed when three pits created by subsidence flooded, together reaching a depth of 40ft in places.  The sudden changes in water depth and temperature can be very dangerous for the unwary.

Pickmere is not mentioned in the Domesday Book. The first reference to ‘Pickmere’ was in the reign of King John (1199 -1216) and referred only to the mere but was later given to the village adjacent to the mere.

By 1274 the village was being called, “Pikemere” – possibly after large pike fished in the mere, but maybe as well after Hugh de Pikemere, a knight rewarded for loyalty by Edward I, who had helped by fighting the Welsh and building Beaumaris Castle. His descendants built the large Georgian farmhouse, now used as Pickmere Country Guesthouse in 1772.  Later in the 1800’s further descendants emigrated to Australia, New Zealand and Tasmania and are now scattered throughout the world. 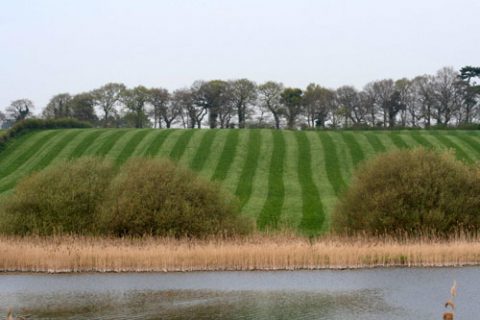 In the eighteenth and nineteenth centuries Pickmere became an important farming community that supported the rapidly increasing population of industrial Manchester and this is reflected today in the three large Georgian farmhouses in the centre of the village and smaller farmhouses and former agricultural workers’ cottages on the fringes of the village.

The mere has been popular with fishermen and from the turn of the century it became a popular attraction for day-trippers.  From the early 1900’s they came in large numbers by bicycle, car, charabanc and coach to enjoy the fresh air and scenic beauty that we still enjoy today. 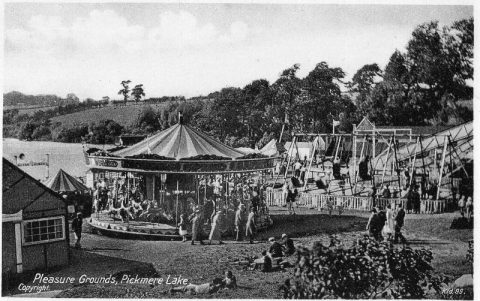 fair visited the lakeside.  This was soon replaced by a permanent fairground, rowing boats and mini cruise boats that took visitors around the lake and which was substantially developed over the next 60 years.

During WWII, many people were evacuated or relocated to Pickmere to avoid the heavy bombing in Manchester, Salford and Liverpool.  The new arrivals lived in caravans or the many timber chalets around the lake and throughout the village. Some 300 were eventually built in and around Pickmere. Most of these have now been removed since they fell into disrepair and no longer met health standards – others have been bricked around and made permanent.

The Cheetham family ran the Pickmere Boating Company for more than 60 years until they retired in 1990. Many of their lakeside attractions are still fondly remembered by generations of visitors.

It is sometimes forgotten these days that it was not uncommon even then for visitors to be queuing all the way back to Tabley along Pickmere Lane, especially at Bank Holidays. When the Cheetham family retired the new owners let the rowing boats and little motor boats fall into decay and the cruise launch, Princess Irene, was sunk in the middle of the lake.

In the 1990’s jet skis and power boats had replaced the previous rural tranquility and other noisy and intrusive developments were taking place around the lake.  By 1997 the company responsible for that operation went into receivership and the Co-op Bank, the main creditor, had discussions with Pickmere Parish Council and Macclesfield Borough Council about a change of use of the lakeside area to part residential and part open space.  All existing buildings on the site were to be removed and their footprint was to be transferred to the northern half of the site in the form of 12 large houses, whilst the southern part of the site would remain open space.  These principles were accepted by residents at a public meeting and subsequently granted planning permission, and we now have Jacobs Way, an area of open space – bizarrely still commonly referred to locally as “the IROS” or “Informal Recreational Open Space”, and the Turton Pavilion named after the late Mr Ray Turton, a longstanding and respected chairman of the Parish Council.  The ownership and control of the open space and the Turton Pavilion was transferred to the Parish Council, although the Council only owns perhaps a fifth of the land bordering the lake, the other four fifths being in the ownership of private interests.

The lake is currently still fished from the Parish Council’s land by Sale Moor Angling Club but other leisure activities at the lakeside have now gone.  The village too has seen some significant changes – the garage closed and Wayfarer’s Court was built in its place.  The caravan site was relocated to its current position creating the space for the building of some 70 new houses on the Clover Drive development.  The former Village Inn on Mere Lane was replaced by a new detached house and town houses and the village lost its Post Office and Village Store in the early 2000s, on the retirement of the postmistress, and most recently the village lost its second public house, when the Elms PH on Park Lane was replaced by a development of four houses.

Today, Pickmere remains a thriving and friendly community.  In recent years some additional businesses have occupied former farm buildings, but it retains its agricultural heritage with a tight village inset surrounded by attractive green-belt land.

Much of the above information was supplied by the late Joe Robinson, our local historian, who kindly gave permission for it to be used in the Council’s original website.  He also supplied most of the black and white pictures on our web site.